You will find lots of miscellaneous maps on this page. Some might even turn out to be useful. Some Google Earth 3D models will be used as well, mainly because they give those who have never been to the tunnel a real perspective as to why a train couldn't make it over the top!

This is the last of many versions of this map. The purpose of this map is to tell people inside the tunnel what is directly above them. This map is 99% accurate. If you ever wander into the tunnel you will notice on the north wall there are numbers every 100 feet. from 1 in the west to 251 in the east. 100 X 251 = 25100 feet, which is the actual length of the tunnel today including the portal facades. This map's first predecessor is actually what inspired this website to begin with. The original map was off by over 1000 feet. This one is however dead on. Just match the number on the wall you reached with the number on the map and you can see what was directly above you.

The method for making this map was fairly complicated. First I had to splice together several 1/2 meter per pixel color satellite images. Then I drew a line from portal to portal. I calculated the length of the line and the vertical (picture wise) height. Using the mighty Pythagoras theorem I determined the length of the line I drew. I divided that by 251 and figured out how many pixels equaled 100 feet. then I painstakingly made a mark every 100 feet and labeled them. Even with the grading inside the tunnel this is almost perfectly accurate.

This picture depicts to the best of my ability (accuracy not guaranteed, but hey, its pretty close) the East Portal village. There is some ambiguity to the grey areas labeled worker housing. Workers also lived further down the road where there are still houses (not on this map). The point of this map is to give the reader a general idea of what is where on the east side.

This image shows a cross section of the Hoosac Tunnel around 1870. Notice the offsets on the west end, most likely indicating digging patterns for water flow (deeper is higher so water wont pool). 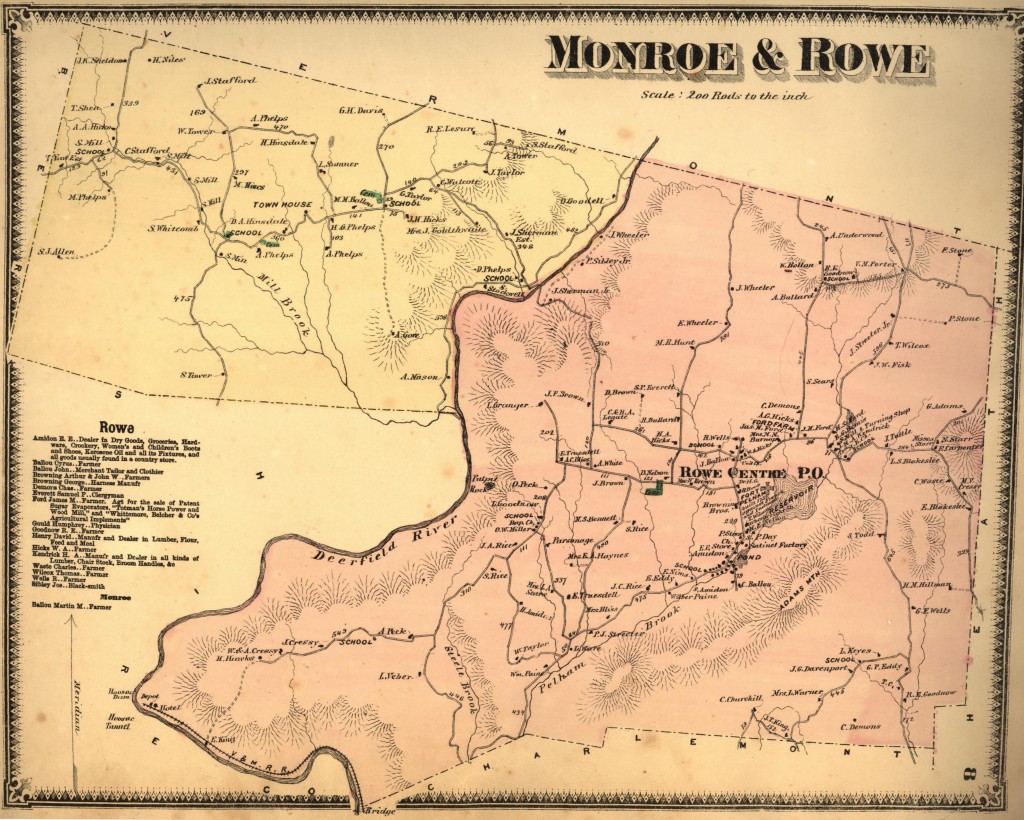 This is an 1871 Map of Rowe MA. Of particular interest is the SW corner where the rail line suddenly ends. Notice the station and hotel. Also notice the road leading up the mountain (present day tunnel road). The right of way of tunnel road presently is nothing like it is depicted in this map. 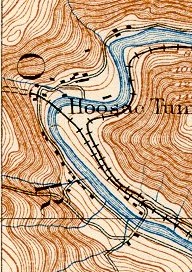 This USGS map (courtesy of docs.unh.edu) shows the East Portal camp as it appeared in 1894. Also notice the buildings further downstream which include the Hoosac Tunnel station. The new Hoosac Tunnel & Wilmington RR can be seen following The Deerfield River northward. I do not believe that all of the houses depicted here were part of the tunnel project, especially the ones further from the portal. All roads depicted here remain except for the road following the river south on the Rowe side (former tunnel road) 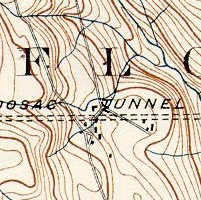 This USGS map (courtesy of docs.unh.edu) depicts the Central Shaft village as it appeared in 1898. All roads shown still exist except for the short dead end which goes off to the SE. Central Shaft road was straightened out where the dead end branches off.

This USGS map (courtesy of docs.unh.edu) shows the West Portal and Shaft camp. Notice the road and buildings on the right hand side. None remain! Also notice the interesting topography near the buildings which consists of spoilage taken from the West Shaft. The small road leading from the West Portal along the stream to the road on the right (present day West Shaft road) is now for the most part a 4 wheeler trail.
BACK "Hauntings"
NEXT "Vital Statistics"