The Central Shaft of the Hoosac Tunnel was an important component of the Hoosac Tunnel's construction scheme, as well as post construction ventilation. Located 12,194 feet from the West Portal, and 12,837 feet from the East Portal (not quite the center, as that would have been too close to the Cold River for comfort). Work commenced on the 27x15 and 1028 foot deep shaft in 1863 under the supervision of Thomas Doane. After the shaft grew enough in depth, a several story tall wooden building housing the hoisting system was built to lower workers into the depths.
On the afternoon of 10/17/1867 the most infamous and tragic accident during the tunnel's construction occurred. As thirteen miners descended the, at the time 583 foot deep shaft, another worker tinkered with an abandoned gasometer lamp. Flammable naphtha fumes leaked out and filled the hoist house. Somehow a spark was created and set the fumes and subsequently the building aflame. All the while the thirteen miners below were none the wiser. As the building burned more than 300 sharpened tools descended onto the miners, then the hoist mechanism, then the building itself. By 3:00am the smoke had cleared, and a miner by the name of Mallory volunteered to be lowered down to investigate and look for survivors. Lowered by rope Mallory descended down the shaft with 3 oil lanterns. As 2 lanterns died out he was pulled back up unconscious. Upon revival he gasp "No hope". Several bodies surfaced as the shaft filled with water. The remaining bodies would not be recovered until the shaft was pumped out and construction began again on 10/19/1868, a year later. As it turned out several miners were not killed instantly. They had built a raft, but were asphyxiated by the oxygen hungry fire. The unlucky contractor: Dull, Gowan & White promptly resigned after the incident.

On 8/13/1870 the Central Shaft finally reached grade. The bucket system was replaced by a fixed guide elevator system. Information on the alignment difficulties can be found on the Alignment Towers page. Once the shaft was down to grade digging could begin on the east and west headings. Each heading sloped slightly downward at about 26 feet per mile so when the adits broke through, water would flow out the portals. Water removal was a major problem as the only way to remove it was to pump it up and out the 1028 foot deep shaft. The first adit to break through was the east heading on 12/12/1872. Water from the west portion could now be pumped over the center high point and allowed to flow out the East Portal. On 11/27/1873 the west heading broke through; successfully piercing the mountain.

In 1899 The fumes from all the rail traffic inside the tunnel became such a problem that a 16' diameter steam powered fan was installed on the top of the Central Shaft. The bottom of the Central Shaft was widened, and a brick arching was installed over the original hole. Two ducts spiraled down from the sealed shaft and intersected the tunnel about 60 feet from each other on opposite sides. The idea here was to have the smoke pulled from the floor as well as the ceiling. A small room was also cut out of the rock on the north side for trackwalker and work crews. This room was and still is known affectionately as "Hoosac Hotel".

In 1911 a building housing a new electric forced draft fan replaced the old wooden steam powered fan. The enclosure building allowed the fan to move much more air. In 1946 The single fan was replaced with the double fan system which is still in use today.

Basically what you need to do is get on to Rte 2 and go up the mountain to the town of Florida. Central Shaft Road is on the south side of Rte 2 near the North Adams border. Follow that road until you reach the Central Shaft Building which will be on your left after about 1.5 miles. 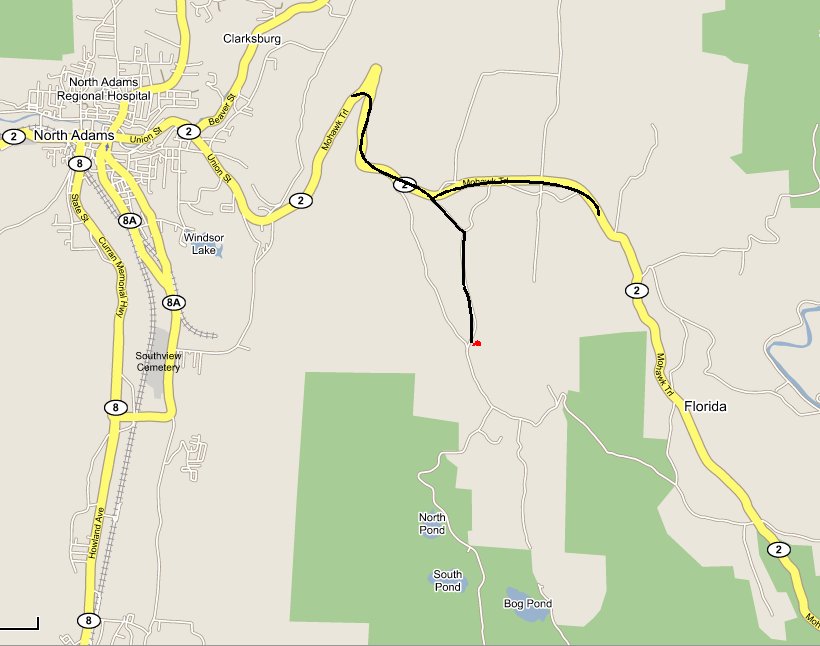 I do not have as many images for the Central Shaft as I do for most other pages, so you only get two categories. I have tried to order these chronologically, with a a little slack allowed for the newest pictures.

Gallery Coming Soon!
BACK "The Bore"
NEXT "Alignment Towers"