The bore's incredibly accurate 9/16 inch error which was discovered after the 2 headings from the central shaft and the west shaft met was made in most part due to the very precisely placed and utilized alignment towers. There were six alignment towers in total, seven if you want to count the ditch next to the central shaft.
Of the six actual towers, four remain findable. The other two were placed at the portals and are long gone. The remaining 4 can be found mostly by way of bushwhacking. Directions can be found below, GPS users will be pleased to find the latitude and longitude listed.

You can read below as to how to access these sites as well as view pictures of their present condition.

If you do visit these sites please don't take anything!
A lot of these sites are disintegrating because people are taking stones! So don't do it. Also it is not cool to deface these properties as you will see in the Whitcomb pictures.

As to the purpose of the alignment towers, they served to make sure the tunnel stayed true to its course (as the name implies). Originally grooved iron markers were used instead of towers, however in 1866 when Thomas Doane took over as chief engineer he resurveyed the line of the tunnel and constructed the six towers mentioned here. Each tower consisted of a transit scope (a device resembling a telescope), a sloped wooden roof on the top of the stone structure on the bottom (except perhaps the Rowe Neck tower which shows no evidence of a stone structure.) On that roof there was a red and white pole which protruded 25 feet straight up. Inside the tunnel plumb bobs (pointed metal weights attached to string so to create tension drawing the string down perfectly straight) driven into wooden plugs were hung from the roof at intervals along the line sighted from the towers. A light was used at the blasting head and was moved and sighted until it was perfectly straight. Surveyors told the blasting crews which way to orient themselves, either to go up down left or right.. and of course, always forward! The tunnel was given a slight pitch to allow for water drainage (hence why you cant see one portal from the other). It was of high importance to make sure each portal was the same elevation, 779 feet above sea level.

The alignment towers also played a vital role at the Central Shaft. A Dutch engineer named Carl O. Weiderkinch was given the job to ensure the Central Shaft was in line with the tunnels path. He achieved this by creating two masonry piers along the center line (which was determined by aid of the towers) each 25 feet from the shafts lip. At the end of the pier was an iron block with a thin vertical slit used for sighting the lining towers. When the lining was perfect, two piano wires 1/20th of an inch apart were stretched between the slits. Two 15 lb plumb bobs spaced 25 feet apart were hung between these piano wires. Both plumb bobs were hung inside of 8 inch wooden casings terminating at light oil containers or mercury containers to minimize string vibrations. Line oscillations caused as much as a 1/100th inch variation, so many samples were required when the lines reached the grade. Once a reference point was projected down to the bottom of the shaft, workers could line the tunnel in a similiar way to the method at the portals.

All that remains of the Rowe Tower are 4 Iron pegs. This site offers the best view of the tunnel compared to the other towers.

Travel down Tunnel Road in Rowe (not from the river side as this is in no shape for a car!) until you reach an area resembling a parking area (note: at the time of this writing Tunnel road was in very nice shape! Certainly passable in my less than rugged car, this is however not often the case! You may have to park at the top in the field which is quite a distance away from the desired parking spot!) There is a trail just past the parking area to the right: follow it. Continue along this trail and always favor the branches to the right. Once you ascend a very steep area and reach the summit go off the trail to the right. Go about 100 feet where you will find another logging trail. Go left and follow this trail looking carefully for an obscure trail marked by pinkish tape wrapped around the trees to the right. You shouldn’t have to walk far to find this, its near a fallen down tree with a large uprooted root system. Follow this marked trail which will ultimately lead you to the remains of the tower. This tower is not at the summit of the hill.

The Whitcomb Summit alignment tower is in fairly good shape. This tower is also fairly easy to get to, however doesn't offer much view due to tree growth and foliage.

Follow Route 2 to the Whitcomb Summit lookout tower. Park by the tower and carefully cross Route 2 to the side with the small shacks. You will see a dirt road leading into the woods. Follow this road which follows the summit ridgeline. You will see the tower on the right after about a mile hike. It is just before you cross under the high tension power lines.

The Spruce Hill alignment tower is by far in the worst shape, it is also fairly hard to get to. The view from the area is very good, you can see the area of the Notch tower, as well as a get a good view of North Adams. This is the highest tower, elevation wise.

Find where the Central Shaft power lines cross Stryker Road in Florida (near Central Shaft road intersection) Follow the trail under these power lines westward which will follow the lines for a fair distance then break off from the north. Continue following the trail and try to favor any branches towards the south. You will come across a T in the trail near a swampy area, go left here and follow this trail; you will pass under the power lines which are very hard to see when there is foliage in the area. Continue past another swampy area where the trail will split yet again. Left brings you to a large rock outcropping with a nice view of the valley, and right will bring you back to the power lines. Once you reach the power lines turn right to the highpoint (about 50 feet east) where you will find what remains of the alignment tower (pile of rocks with a power line pole sticking out)

This tower is by far in the best shape. You can still see all the masonry marks on the stones. This structure is nice and square and solid.
All of these pictures were taken in the dark. Turns out after a first failed exploration I tried again with one of my friends at night. While checking my maps and doing a flashlight panoramic scan in the area I thought the tower should be we both noticed the unnatural angles and grey color. Sure enough we found the treasure we sought. Most pictures came out surprisingly well.

The East portal alignment tower is long gone now, it was removed during the completion of the tunnel. 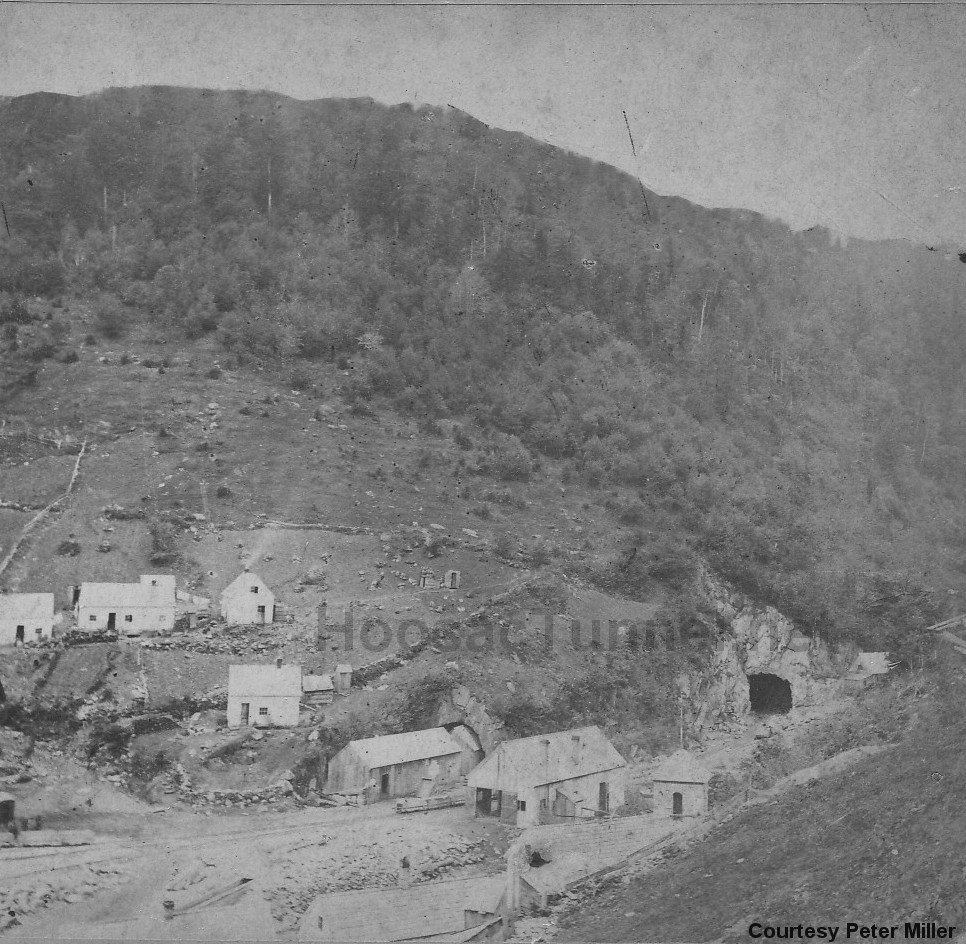 The Alignment tower is the small building that appears bottom left of the portal. You can barely make out the pole protruding from the roof in this image.

The exact location of the West portal Alignment tower is unknown by me. I suspect that it was actually contrary to most comments located west of the portal of the Haupt Tunnel, somewhere south of the curved cut. Further physical investigation will be required.
BACK "The Central Shaft"
NEXT "Compressor Building, Sluiceway, Gate & Deerfield Dam"